Sankranti festival season is known for kites flying and sesame sweets. Kite flying has become dangerous for the citizens because of the dangerous strings used in flying the kites. The harmful strings, known as Manja, are glass powder-coated kite strings. Manja has become life-threatening for birds, animals, and humans too.

The recent incident that took place in Mancherial is live proof of this. A two-wheeler ride has lost his life because of a kite’s Manja. The man reported as Bhimaiah, along with his wife, riding a bike on the old mancherial national highway when the horrific incident happened. Suddenly, Manja got entangled around his throat-slitting it within seconds.

The man started bleeding heavily on the spot. His wife was also injured in the incident. A few passers-by stopped their vehicles and helped the couple. Unfortunately, Bhimaiah has lost his life on the way to the hospital. Further investigation is going on about the incident. The incident has been making rounds on social media platforms. 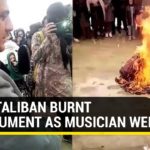